A documentary film about the making of the Tourist clay animation.

The film observes the work of the team through the different phases of making the film to it being completed. The camera follows the team almost everywhere, home, to the workshop, the editing suite, music studio etc.

The documentary demonstrates the difficulties of making a clay animation, and the hard work that goes into it. 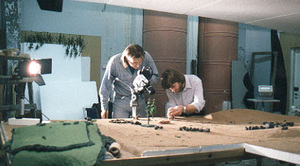