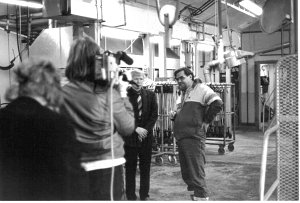 Aaro Heikkilä; the City Manager of Joensuu, known as the ’Village Chief’, has both charmed and angered people with his confident manners, straight talk, and actions that waver somewhere between legal and illegal.

Aaro Iivari Aukusti, farmer’s son is a portrait of Aaro Heikkilä. It was shot during a time when Heikkilä was temporarily expelled from his position as the City Manager on suspicion of a malfeasance. Heikkilä, who thinks he has supernatural abilities, exhibits his skills as an actor and a comedian, and talks about things that have been kept quiet before.

Neither the ’academic dumbwits’ nor his ’political enemies’ can escape Heikkilä’s verbal weapons when he begins to fire.